‘The atmosphere in the room has been incredibly playful.’ JMK Assistant Director Marcus Bazley on week two of rehearsals of Beauty and the Beast as the pantomime takes shape.

How have we already reached the end of week two of Beauty and the Beast rehearsals? The last couple of weeks have flown by and yet we’ve made really good progress and the show is starting to take shape.

We have now finished our first full work-through of the play. The broad approach to rehearsals has been to work through the script from start to finish, giving each scene a rough outline. The actors have been absolutely fantastic – most of the time knowing their lines from the start and being full of suggestions for little line tweaks and for their physical relationship with the other characters on stage. Pantomime is a relatively unique rehearsal process as the style means the cast have to be very responsive to their audience and part of the purpose of panto is to comment and poke fun at contemporary events. So there have been various moments in rehearsals where actors have arrived with suggestions for new jokes to be included, or where actors have been specifically asked to think about where jokes could be added to a particular moment. It’s an important part of actors taking full ownership over the piece and allowing them to have fun and play with their audiences. The atmosphere in the room has been incredibly playful and there’s been a lot of laughter as we explore different ways of playing scenes or different bits of choreography. 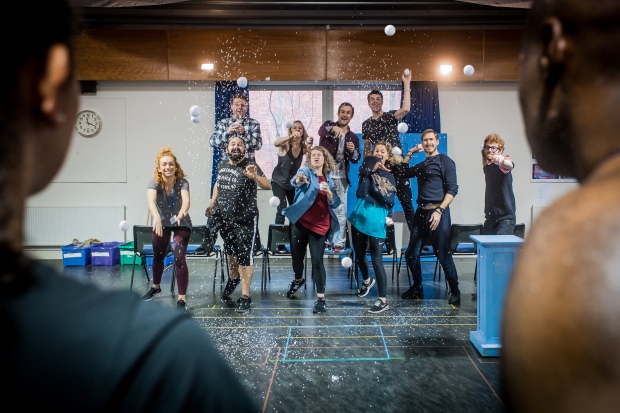 The Beauty and the Beast cast, choreographer, director and assistant director have fun during rehearsals

As well as the adult company, we also have a young company in the show who act as our ensemble. I have been completely blown away by the skill and professionalism of this group of 12 girls. We have very limited time with the young company but the time is used incredibly efficiently thanks to their focus and commitment – and thanks to the remarkable energy of Nicky Griffiths, our choreographer. The young company are so much more than just a way of including local young people in the panto – they are an integral part of the show and they really rise to this challenge and responsibility.

The other thing that has been noticeable this week is the number of pink and glittery props that have gradually started to appear in the rehearsal room! The stage management team have been working away making and sourcing props so that the actors can get as familiar as possible with them during rehearsals and so we don’t suddenly discover a scene won’t work when a prop is introduced late in the process.

This is also the point where the practicalities of staging the show very much come to the fore. Meetings are squeezed in with the production team to plan certain on-stage effects. There are some big set-piece effects in this show that need quite intricate planning – but I’m not revealing anything!! And you certainly know you’re well in the swing of panto rehearsals when everyone in the production meeting has some form of glitter on the face! Seriously, we’re finding glitter everywhere!!

Beauty and the Beast runs in the Main House of Salisbury Playhouse from 1 December to 13 January 2019. For more information or tickets visit www.wiltshirecreative.co.uk or call 01722 320333.

Talk to us.... Cancel reply